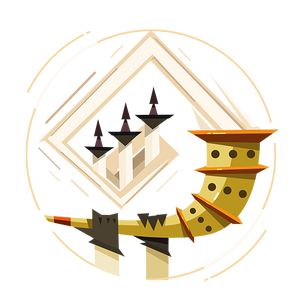 Command, command forward, or move is one of the ability effects in Stormbound: Kingdom Wars.

It was exclusive to the cards of the Swarm of the East previously, but now has also been taken up by Eloth the Ignited.

Commanding a unit makes it move in the specified direction immediately. Just like at the start of their owner's turn, the unit will attack enemies if it moves into them and won't move if it is blocked by a friendly unit or structure.

Commanding confused units will cause confusion to apply, allowing the unit to randomly move sideways and attack friendly units and structures.

Visually, command is represented with a horn and blue concentric circles.

Command is very versatile and powerful. It can surprise your opponent and win the game sometimes, but used poorly it can make your units vulnerable.

There is 1 quest that references commanding.